Keeping Track of the Environment

Our vision is to promote the development of a worldwide environmental monitoring network. We encourage CyberTracker users to communicate with others about their projects. We welcome a short description of your project with photographs and contact details sent to This email address is being protected from spambots. You need JavaScript enabled to view it..

The outbreak of Ebola in West Africa have resulted in huge cost in human lives and economic losses. Even the indirect economic impact on Africa as a whole has been huge as tourists have cancelled visits to Africa due to the fear of Ebola. In future it may be more cost-effective to monitor signs of potential outbreaks of Ebola among wildlife, especially along trade routes that may spread Ebola to highly populated areas.

The BBC reports that Bill Gates says "surveillance systems" are needed to spot the signs of a disease outbreak earlier and prevent crises like the Ebola situation in West Africa. See BBC Report here.

A cost-effective solution may include forest patrols especially along trade routes that could introduce Ebola via bush meat to high population areas. As indicated by the attached images, Ebola may be introduced to humans via the consumption of Duiker and Bush Pig. Using CyberTracker to monitor the tracks & signs of Gorilla, Chimpanzee, Duiker and Bush Pig may indicate potential outbreaks of Ebola even before it infects human populations.

Data collected from 2000 to 2003 by trackers working for the ECOFAC programme and using the CyberTracker have showed up the extent of the Lowland Gorilla mortality due to Ebola in the Lossi Sanctuary, Republic of Congo.

Wild animal outbreaks began before each of the 5 human Ebola outbreaks. Twice we alerted the health authorities to an imminent risk for human outbreaks, weeks before they occurred.

This information has been confirmed by the Spanish primatologist, Dr Magdalena Bermejo, who has studied the gorillas in Lossi for ten years, and by the veterinaries of the International Medical Research Center of Franceville (CIRMF).

All the eight families (139 individuals) followed by Dr Bermejo since 1994 have now disappeared from the study area (40 km2). Two of these families were habituated to human presence. This habituation was not only a first with lowland gorillas but also was a first sight tourism experience in association with villages.

The CIRMF veterinaries have been able to collect a lot of samples and to confirm the presence of the virus in Chimpanzees and Gorillas. And, carcasses from other species have been found in the same area. Abundance indications collected on other species by the trackers, such as Duiker and Bush Pig, (see table) indicates that these species were also infected by Ebola.

Ebola, like other emerging diseases, remains a critical area of study to be explored not only to understand large primate dynamics and for their conservation, but for its potential impact on humans.

Drop in Index of Abundance for Chimpanzeez, Gorillas, Duikers and Bushpig: 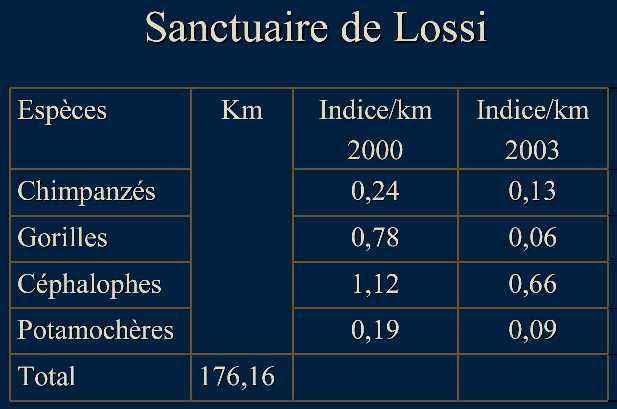